Where and How Are Stars Born?

For millennia, mankind has been striving to find the answers to the great mysteries of the universe. We have always been fascinated by the night sky teeming with bright stars. Have you ever wondered how the stars form in our galaxy and millions light-years away from the Solar system, in other galaxies? Luckily, the stars have revealed the secret of their origin, and we’re eager to share it with you.

Before we dive into the process of star formation, let’s take a closer look at the major life phases of a star.

Where do the stars form? New stars are born in giant clouds of gas and dust, or nebulae. A star begins when gravity forces the dust to bunch together. The more the dust, the stronger the gravity and the hotter the temperature. Once it gets hot enough, nuclear fusion reactions trigger a new star formation.

The star continues to burn energy and shine for billions of years. In this state, the star spends the majority of its life. This period is called the main sequence. During the main sequence phase the star achieves a balance between its own gravity that makes it shrink and the heat that makes it grow bigger. The star remains in this state until it runs out of hydrogen fuel. Fusion rates range from just a few million years for the most massive stars to 13 billion years for the least massive. Interestingly, our Sun has a hydrogen-burning lifetime of about 10 billion years, half of which are history. 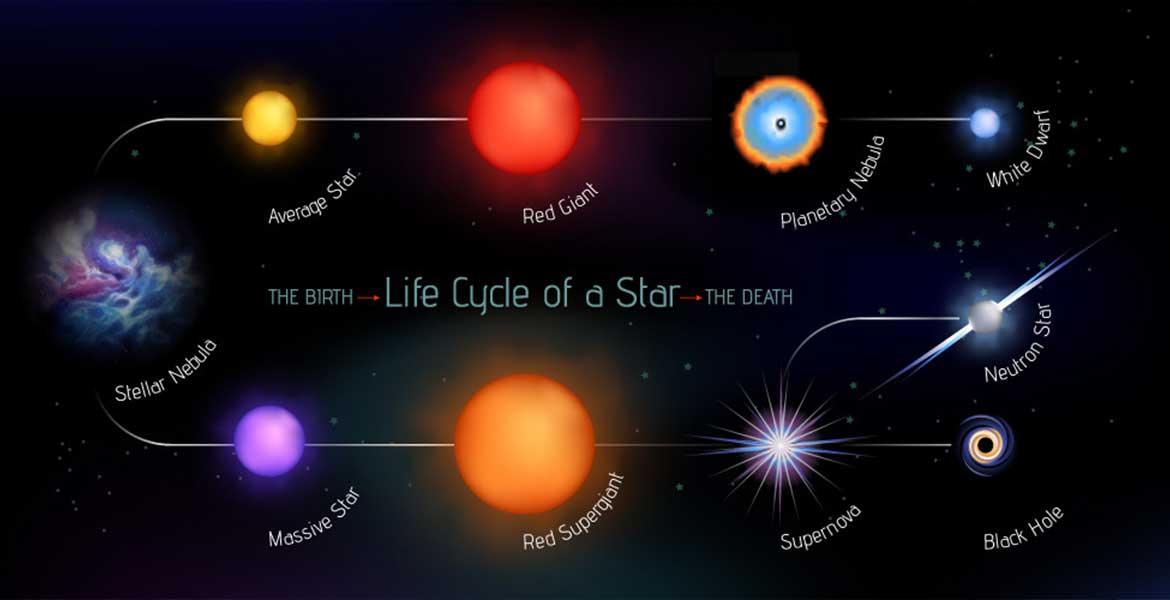 When the star has exhausted the supply of hydrogen, it becomes a red giant. Many of the well-known bright stars are red giants, because they are luminous and moderately common. Quite a massive star, a red giant can be up to hundreds of times the mass of the Sun. However, their outer layers have lower temperature, which gives them a reddish-orange hue. Although red giants have lower temperatures, they are way more luminous than the Sun because they are massive stars.

Eventually, the star’s core starts producing iron, which causes it to collapse. What happens next depends on the size of the star. The average star becomes a white dwarf. Such stars have rather faint luminosity as it comes from the emission of stored thermal energy, as no fusion reactions occur in a white dwarf. A larger star will typically create a huge supernova explosion, following which it may become a black hole or a neutron star.

How are stars born?

Located hundreds of thousands light years away from us, stars that appear as small sparkling dots are actually giant spheres of superhot gas. Stars get so hot and produce visible light by burning hydrogen gas into helium in the process of nuclear fusion. Simply put, two or more hydrogen atoms collide at high speeds and form a new type of atomic nucleus — helium in this case.

It is estimated that the observable universe has 1022 to 1024 stars, however, most of them aren’t visible to the naked eye from Earth. Each of them began with the gravitational collapse of clouds of dust and gas in star forming regions.

Clouds of dust and gas where stars are born are called nebulae. Most nebulae are of vast size, often hundreds of light years in diameter. For instance, the Orion Nebula, the brightest nebula in the sky, occupies an area twice the angular diameter of the full Moon and is visible to the naked eye. It is the closest region of massive star formation to Earth. Another example of a star-forming region is the "Pillars of Creation" in the Eagle Nebula. 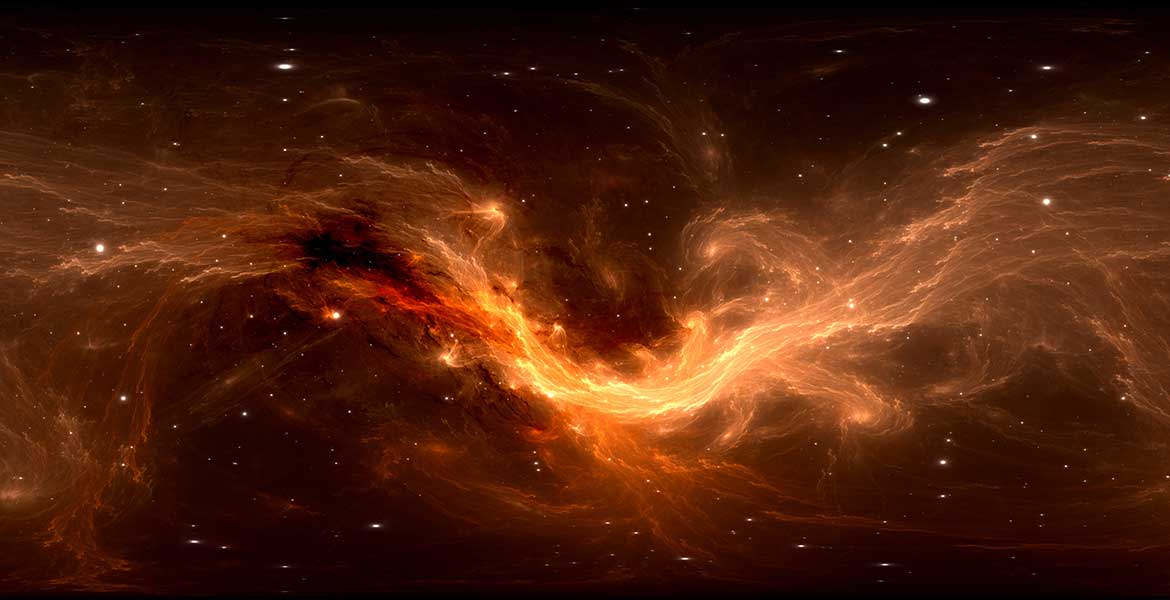 For a star to form, it’s necessary that an interstellar gas and dust nebula contains a molecular cloud which is in a state of gravitational instability. There are several possible reasons for the gravitational instability to occur, for example, explosions of supernova types near the molecular cloud, proximity to other stars with intense radiation, collision of different molecular clouds or even galaxies, or the presence of external magnetic fields, such as the magnetic field of the Milky Way galaxy.

How many stars are born each year

Understanding the physics of star formation

The huge clouds of gas and dust start shrinking due to the above mentioned gravitational instability. As a cloud shrinks, it gets smaller and smaller, and then breaks up into clumps. Eventually, the temperature in these clumps rises high enough and they become so dense that nuclear reactions begin.

When the temperature reaches about 10 million degrees Celsius, the smaller dust clouds become a new star, or a protostar. The cloud’s core contracts and heats up. The core eventually gets hot enough to glow, first with infrared light and then with visible light.

However, a protostar is quite unstable. It needs to achieve and maintain balance between the gravity driving atoms to its center and the gas pressure that pushes heat and light away from the center. When a dying star does not acquire enough mass to trigger sustained nuclear fusion of ordinary hydrogen into helium in its core, it becomes a brown dwarf, or a failed star.

Stars younger than 10 million years old and less than 2 Solar mass (a unit of mass, approximately equal to the mass of the Sun) are called T Tauri stars, while those with greater mass are referred to as Herbig Ae/Be stars. A new star emits jets of gas. Coupled up with the radiation from the neighboring massive stars, these jets of gas help to drive away the cloud from which the star was born.

Basic composition all stars are born with

Stars born in the present Milky Way galaxy consist of approximately 71% hydrogen atoms and 27% helium atoms, with a small amount of heavier elements. The amount of heavy elements is estimated based upon the iron content of the stellar atmosphere, as it’s relatively easy to measure. Interestingly, the presence of heavier elements might mean that the star has a planetary system.

The star with the lowest iron content ever measured is the dwarf HE1327-2326, it has just 1/200,000th the iron content of our Sun. For instance, the super-metal-rich star Mu Leonis has almost double the amount of iron as the Sun, and the planet-bearing star 14 Herculis has around triple the iron. There also exist chemically peculiar stars that show unusual abundances of certain elements, especially chromium and lanthanoids.

To give birth to a star you need gas, dust, gravity, and violent stirring. Scientific observations show that there’s a lot of gas out there, and multiple opaque patches prove that dust is pervasive.

The dust is made up of carbon, silicon, magnesium, iron, and other metals. It is believed that dust makes up approximately 1% of the mass of interstellar matter.

Dust in interstellar matter is likely to clump together, sometimes forming thick clouds. These opaque clouds are abundant in molecules of more than 200 different species. However, the dust clouds are dominated by molecular hydrogen. Carbon monoxide and dioxide, methyl alcohol, ethyl alcohol, and even some molecules that do not exist on Earth are present as well.