In the last century, scientists have found no more than thirty supernovae per year. And already now maps of the starry night sky are created, and are constantly updated showing up to hundreds of thousands observed supernova. The study of such objects makes it possible to learn about the mechanisms of thermonuclear explosion and to accumulate knowledge about how gravity is arranged. You need to know the answer to the question “What is a supernova?” and why they are really old.

What Is a Supernova? - Definition and Astronomical Facts

What is a supernova hasn't always been a straightforward question. Initially, the observed star bursts, star burns or star explodes were called new as people believed that this was the birth of new stars seen in the night sky. But in fact that's when a supernova occurs. When stars burn it resembles earth collapsing in the Armageddon movies.

Modern astronomy began with Tycho Brahe who in 1572 discovered the famous supernova in the constellation Cassiopeia. Its apparent magnitude reached -4, almost like Venus. However, in the XIX century a new star S Andromeda in our neighboring galaxy M 31 was discovered. And in the XX century, astrophysicists Walter Baade and Fritz Zwick realized that this star has a much higher release energy than ordinary new ones, which are discovered more frequently. The term "supernova" appeared after the discovery of the neutron and neutron stars when it was observed that the formation of neutron stars is associated with supernovae. At the flash of a new actual supernova explodes not a young but a very old star, the so-called white dwarf. During this flash, a carbon oxygen white dwarf star shines about 100,000 times stronger than the Sun during the week. A supernova has a light output that is about a billion or even 10 billion times greater than solar. Therefore, scientists have concluded that the star discovered by Tycho Brahe is a supernova.

However, the first recorded historical supernova is the Crab Nebula. Crab Nebula is a supernova remnant discovered in 1731 by John Bevis. Crab Nebula corresponds to a bright supernova spotted in 1054 by Chinese astronomers.The last observed supernova in the Milky Way Galaxy is SN1604.

What types of stars end their lives with supernovae?

Now that we know what a supernova is, let's look at the stars related to them (massive stars, guest stars, companion stars, white dwarf stars). 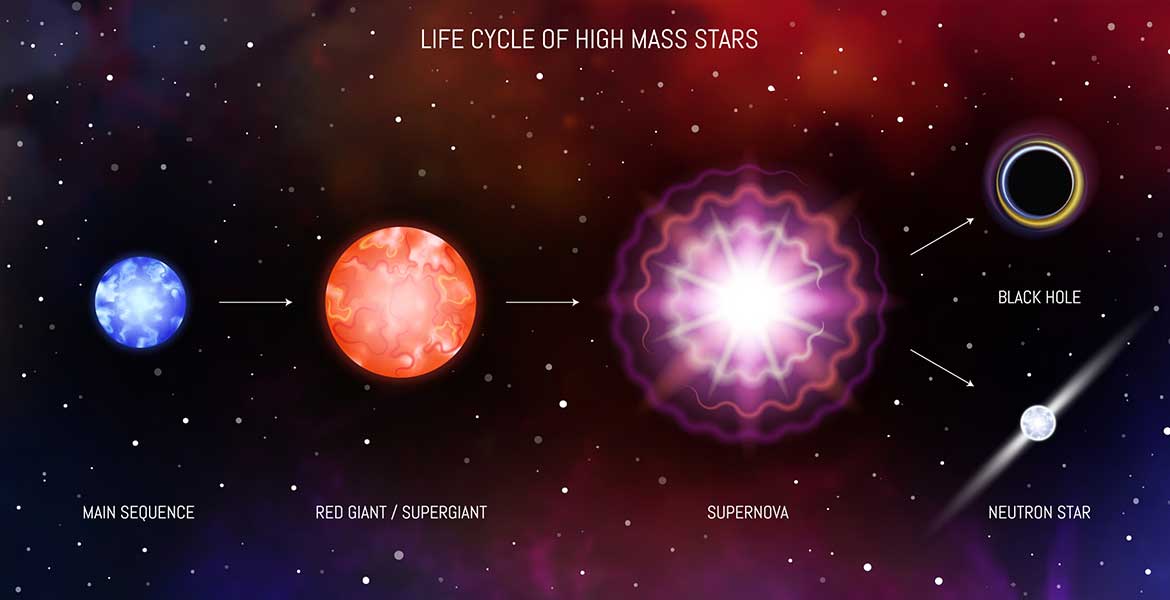 Supernovae are considered relatively old stars which are ending their life cycle because they turn into either a neutron star or a black hole, and some explode without a residue. Thus, the word "supernova" means a super-powerful, super-powerful explosion, not that it is a "freshly baked" star. There are about 100 billion stars in the Milky Way, most of them weaker than our Sun and ending their lives relatively quietly. About one star dies a year, and somewhere once or twice a century some stars explode. In our Galaxy, we have not seen explosions since the time of the Kepler supernova, discovered after the supernova Tycho Brahe. This is because we live on the edge of the galaxy's disk and do not see distant stars, but we do observe a dozen supernova explosions in some neighboring galaxies. Comparing their size, properties and masses with the characteristics of the stars of the Milky Way, we understand that about one in 100 or 50 stars explodes.

What are types of supernovae?

Type Ib supernovae happen when a massive star runs into a collapse and explosion of a star happens due to the star`s gravity when the star runs out of nuclear fuel. In type Ib supernovae there is also a stellar core collapse of massive stars when heavier elements under own gravity of a bright star have an outward push and blast wave slams the entire star.

How is a supernova formed?

There are signs that indicate the formation of supernovae: 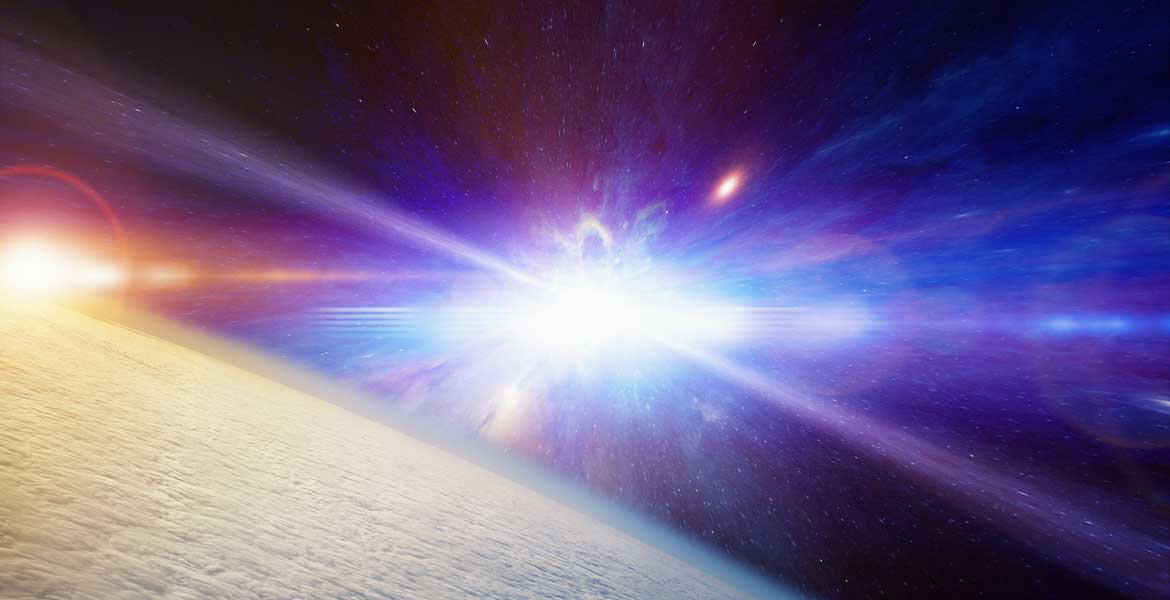 The supernova explosion is divided into two types:

Tycho Brahe and Kepler's famous supernovae are thermonuclear. We know this from the spectrum that Japanese and German scientists were able to obtain more than 400 years after the explosion of the supernova Tycho Brahe. They analyzed a flash from a supernova that illuminated some dust nebula scattered around the world, and found a clear spectrum of a thermonuclear supernova.

The supernova phenomenon is characterized by an increase in the brightness of the star by 4-8 orders of magnitude and its slow decay, as well as a large release of energy as a star explodes. However, since their registration is carried out on the ground, it means that everything is over.

A supernova explosion is a large emission of radiation similar to nuclear fuel burning. And it greatly affects our lives, Milky Way galaxy, and other galaxies. According to the rules of the Ministry of Emergencies, a value 10 times higher than the standard on the radiometer is critical for life. But in an airplane at an altitude of 10 km above sea level somewhere in Canada (or somewhere near the magnetic poles) is 20-50 times larger in the background. This is the cause of cosmic rays that are born supernovae. It is also a source of radioactive elements and hemoglobin in our blood has the same isotopic composition of iron nuclei as in our blood.

How long does a supernova last?

When a star undergoes a supernova explosion, its core collapses and the star dies. This lasts for a short period of time (approximately 100 seconds). These data are denied by analyzing the curves of light (how the brightness of the supernova changes over time), taking into account the types of supernova. Supernovae that occur as a result of a substance falling on a white dwarf are usually brighter, but also rapidly fading (the peak of brightness can last up to several days). The supernovae created by a massive star's core collapse are characterized by the presence of a plateau for brightness (the peak can last up to several months).

How bright are supernovas? 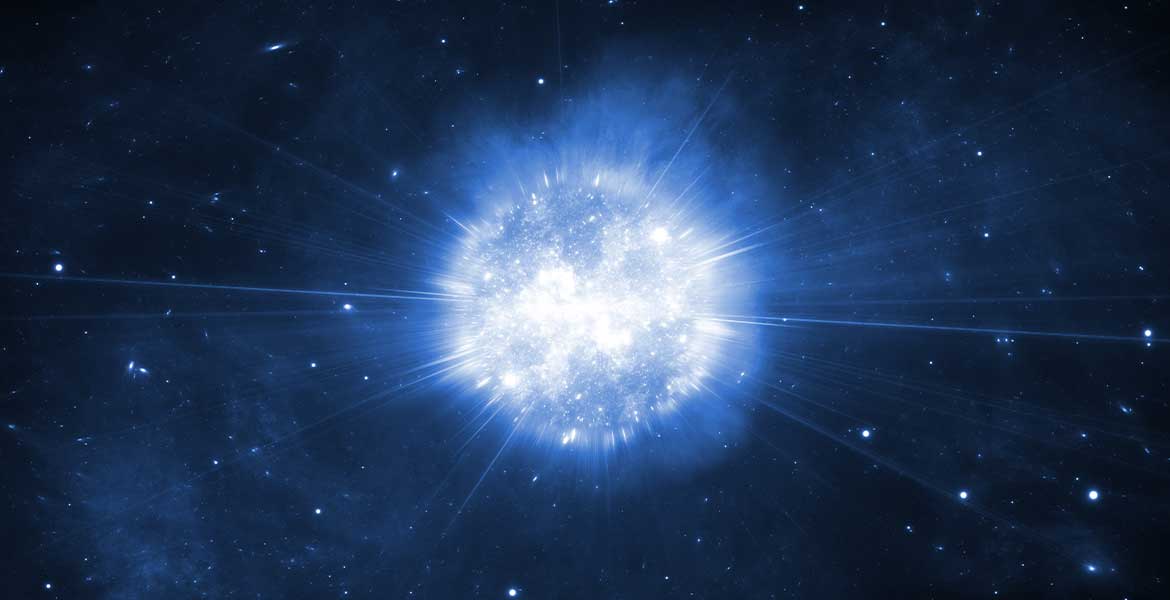 The maximum brightness of supernovae is calculated using the physics and mass of a dying star. This value is different for different cases. The supernovae are so bright that if you compare the right supernova at a distance of 10 parsecs to the star Sirius, the first will be 1.5 * 107 brighter.

In absolute terms, this brightness is about -19, but you will notice that they look much dimmer because the supernova is so far away.

What happens after a supernova?

After the supernova, the following is possible:

Therefore, in general, a picture will be observed when the front of the external shock wave is heated to temperatures T_c> = 10 ^ 7 K and emits in the X-ray range with photon energy of 0.1 - 20 keV, and the gas on the front of the inverted fvil forms another X-ray region. There is also thermal radiation, as evidenced by the lines of highly ionized Fe, Si, S in the obtained spectra.